A book focusing on the nexus between language and literature in the Hebrew Bible/Old Testament, with specific attention to how the former is used to create the latter; topics include wordplay, wordplay with proper names, alliteration, repetition with variation, dialect representation, intentionally confused language, marking closure, and more.

Readers typically approach the Bible (and specifically, the Hebrew Bible/Old Testament) primarily for its moral teachings, theological insights, historical information, and the like, without giving much or even any consideration to the literary aspects of the text. The result is that while the Bible’s contents are well known, the careful and often sophisticated manner in which those contents have been crafted is usually poorly understood. As a result, readers frequently miss out on a great deal of the richness the Bible has to offer. The goal of How the Bible Is Written is to bring interested readers—scholars and laypeople alike—closer to the original text of the Hebrew Bible/Old Testament and to provide them with a greater appreciation of its literary artistry and linguistic virtuosity. In short, this book focuses not so much on what the Bible says as how the Bible says it.

Specific topics treated in this book include wordplay, wordplay with proper names, alliteration, repetition with variation, dialect representation, intentionally confused language, marking closure, and more. Readers of this book will gain a profound appreciation for the artistry and genius of the biblical authors and will better appreciate how understanding the way in which the Bible is written contributes to a deeper and fuller understanding of what it says.

Gary A. Rendsburg is the Blanche and Irving Laurie Professor of Jewish History at Rutgers University. He is the author of six books, including The Redaction of Genesis and The Bible and the Ancient Near East (co-authored with Cyrus Gordon), and more than 170 articles. 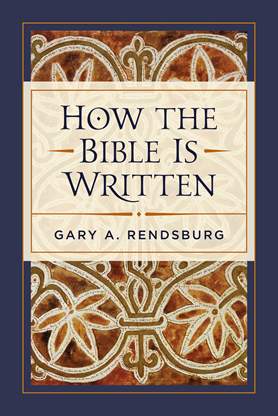