Galilee Revisited is a handy, portable book that guides the pilgrim or tourist in Israel along a 20-mile route along the northwestern shore of the Sea of Galilee—with the help of Mary Magdalene! This stretch of road is a small part of the historical Via Maris traveled by millions of pilgrims throughout the centuries and covers the area often called the “Evangelical Triangle,” which includes the sites of ancient Magdala, Tabgha, Capernaum, Chorazin, Bethsaida, and Kursi, with views of the Mount of the Beatitudes.

Aside from Mary Magdalene, the tour guides in Galilee Revisited are a group of famous pilgrims from the past, including Saint Jerome, Ernest Renan, Robert Graves, Bishop Arculf, Mark Twain, and even Rasputin. From them, we learn what this road was like a hundred, five hundred, and even a thousand years ago, as well as their personal, often troubled, and hugely varied opinions about this sacred route and the teachings of Jesus.

Galilee Revisited is an entertaining, accessible volume that is a useful supplement for anyone traveling in Israel or who is interested in the Holy Land. Originally published in Israel in 2000, the Hendrickson Publishing Group is pleased to be able to make this delightful book more readily available in North America.

At the YMCA with St Jerome

The Russian Monastery with Rasputin

At the Villa Melchett with Eva, Marchioness of Reading

At Magdala with Mark Twain

Cursed Chorazin with Albert Schweitzer and His Quests

Helga Dudman, an author and journalist, worked for The Jerusalem Post for thirty years. She is the author of a dozen English-language nonfiction books, including Street People, The American Colony, Letters Home to San Francisco from Occupied Germany, 1945–1946, and Tiberias. Born in New York in 1923, she has lived in Israel for over forty years. 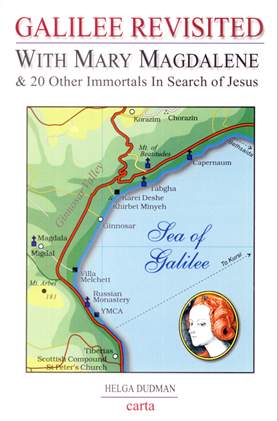