Why Should You Study Greek? 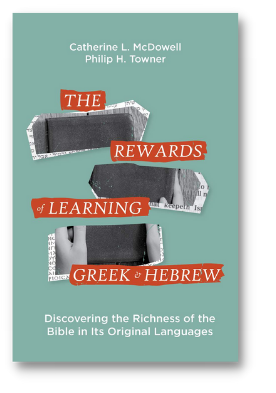 Authors, professors, and scholars Catherine L. McDowell and Philip H. Towner know learning a new language can feel daunting. However, they strongly believe the benefits of studying the biblical languages far outweighs the initial trepidation. A few weeks ago, we answered the question, ‘Why Should You Study Hebrew?’. If you missed that excerpt from The Rewards of Learning Greek & Hebrew you can read it here. Dr. McDowell began to lay out the reasons why studying the Bible in Hebrew is worth your investment.

Now we turn to the second half of the book, which focuses on why studying Greek is worth your time. Enjoy this excerpt from The Rewards of Learning Greek & Hebrew by Philip H. Towner and these compelling reasons to take the plunge and learn the original languages of the Bible. In it, Dr. Towner shares the overarching benefits of studying a new language, as well as specific literary tactics used by authors of the New Testament. He challenges us to view even the disorientation of reading in a new language as a benefit.

The title of this book implies that learning to read the Greek of the New Testament is worth the investment of time and effort. As someone who has done so and has been reading Greek texts for more than forty years, I can attest to this. But describing the benefits for an audience that has not yet taken up the challenge, for whom it still is “Greek to me,” is another matter. I can insist that a reading knowledge of the biblical languages grants a degree of access to the biblical texts that reading translations alone cannot. This is of course true. Demonstrating that fact is likewise another matter. Attempts to make such a case on the basis of fine points of Greek grammar and syntax are likely to be more puzzling than elucidating, unless you are already on the inside of the language. In fact, such matters are usually taken up in advanced Greek exegesis courses.

What will follow, then, will be two kinds of demonstrations. Half of my argument is of a general nature, based on overarching considerations that might apply to learning any language, though I will make these cases on the basis of specific examples from the Greek NT. The other half of my argument will consist of examples of some of the more accessible literary tactics employed by NT authors to add force, insistence, color, interest, and so on to their message. I’ll ask you to imagine the effects created by certain figures of speech—“imagine” because the effects produced by language games are usually language-specific. You won’t be able to “feel” all the force because the rules of their communicative dynamics are culturally shaped. But I think you’ll get the idea, and I think you’ll come away from one passage or another of the NT with a new sense of its intended impact and how reading the Greek text is a dive beneath the surface of the translation to original figures and structures of speech that create such impact.

Comparison of the Greek text with English translations is inevitable in this sort of exercise. However, the intention is not to do a critical analysis of any given English translation or of translations in general. The idea is rather to work from what is familiar to that which is unfamiliar and, in the process, to make the features of the unfamiliar visible (word patterns, rhetorical structures, “textures”), and consider how they “work” in the making of meaning. Having said this, and with full awareness that the vast majority of Christians today access the Bible through translations, if you are in fact interested in biblical studies, translations can only take you so far. To assess the scholarly work of others and to engage in it directly requires knowledge of Hebrew and Greek.

Finally, before making a proper start, some might suggest from the declining investment in the liberal arts, or declining interest in the biblical languages in seminaries and divinity programs, of the increasing “fluency” of the language modules of Bible software, or some combination of these, that an argument for the importance of studying biblical languages to the point of reading competence is a rather quaint notion. But to go out on a limb here, I’d be willing to bet that it is those who have studied the biblical languages who take the most and best advantage of the language modules of today’s Bible software. After all, they know the right questions to ask, the most significant searches to undertake. In any case, among the church’s missional responsibilities in this ever more complicated world, the study of the Scriptures is central. Those suitably equipped are tasked to identify and define the earliest trajectories of thought about God and godly behavior and to extend them into today’s various situations. Biblical studies remains an unfinished task, and reading the biblical languages is the foundation of the task.

When the Text Invites You In

In this opening reflection, partly invitation, partly provocation, I will describe two overarching benefits of studying Koine Greek. They come out of my experience, but friends and colleagues in the field will corroborate what I say.

In John 1:50-51, the last verses of the chapter and the closing comments of the three-part section in which he begins to call his disciples, Jesus concludes his fascinating conversation with Nathanael. I will forego the details here, but essentially, Jesus surprised the would-be disciple by describing where he had been (under the fig tree) before Philip had even gotten to him. Nathanael, on the spot, confessed his faith in Jesus as Son of God, King of Israel. Jesus responded:

“Do you believe because I told you that I saw you under the fig tree? You will see greater things than these.” (John 1:50)

What is the meaning of this surprising shift from “you” singular to “you” plural? First, let us observe the ambiguity that exists in the case of English, which in fact might be carried over in an English translation, obscuring a literary subtlety. (Many other modern languages have separate singular and plural “yous” like Greek; in English, the only way we have of conveying this is by saying “y’all” or “you guys.”) Translations that provide marginal notes or footnotes, such as the NRSV, will point out the shift, but to what effect?

The shift in number creates a shock, a disturbance for the initial listening audience (the first audience of the Fourth Gospel “heard” this story) and any subsequent reading audience. What this does is open the Nathanael story, and indeed the entire narrative of the Fourth Gospel. It lets the audience in, in a way similar to the comment near the end of the Gospel (20:30-31) in which the narrator shifts from the narratival third person to address the plural “you”:

Now Jesus did many other signs in the presence of his disciples, which are not written in this book. But these are written so that you may come to believe that Jesus is the Messiah, the Son of God, and that through believing you may have life in his name.

The literary effect in each case is like the “breaking through the fourth wall” technique of theater and film in which a performer, by turning to and addressing the audience directly, closes the distance between story and audience, inviting those outside the story to enter within and make it their own. If we imagine a story as having space, texture, and topography, this move turns a two-dimensional narrative into a three- (or multi-) dimensional story in which an outsider may become to some degree an insider.

It might be argued that the notes provided in some translations grant sufficient access to the shift in number. Yes, belatedly and in terms of information. But in terms of reading experience and response, a footnote is secondary to the text-experience itself (and in fact capable only of producing its own kind of effect): like the difference between being part of an exclusive group of friends invited personally by an esteemed host and a second-tier group whose invitation is a “note to all” posted on the break-room bulletin board.

Disorientation, Defamiliarizing, and “The Art of Reading Slowly”

Another overarching benefit of learning to read biblical Greek might be described, surprisingly, in terms of the disorientation and disruption it involves. What has been familiar territory, easily traversed—your English Bible—has suddenly, in Greek, become a wild, unknown frontier that takes painstaking effort to move through at all. This is something of what it is like to begin to learn Greek. And if I’m being honest, this slow, plodding, and often frustrating aspect of the early stages of language learning is a frequent deterrent to taking on the challenge in the first place.

There are no mother-tongue speakers of NT Greek (despite the protestations of my Greek friends and colleagues). So, learning to read it is an unnatural activity that will for some time involve moving more slowly and thoroughly through the biblical text than one might if reading the same text in a mother tongue. “Reading slowly” in this sense is reading with fuller awareness, a kind of “close-reading” with eyes wide open, alert to details. As you learn the details of Greek grammar and syntax and begin to appreciate the unique impact created through the sound, rhythm, figures of speech, and idiomatic expressions, you become more sensitive, not only to what is said, but also to what is not said. A text most familiar and tame in your English Bible, now in Greek, ripples with freshness, disturbing the status quo. You will never look upon your English Bible in quite the same way—you come to know “too much” to be fully satisfied with translations. But this is a wonderful frustration. Nothing like a little disruption to blow out the dust and cobwebs of what has become all to routine.

The reading and interpretation of literary texts, including those written in biblical Greek, is not a precise science but really more of an art or a craft. If your goal is to be an interpreter of the New Testament text, acquisition of a reading knowledge of Greek and learning the art of reading closely and slowly are prerequisites. The New Testament is entering its third millennium of scholarly interpretation, and to critically assess the contributions of those who have gone before, one must follow the Greek and tread the interpretative trails already blazed. But the Greek text itself, read today in conversation with what we are still learning about ancient culture, politics, and art, promises still more treasures for those who are able to read it with understanding.

In subsequent chapters including “Swift Was the Fall”, “Say What? Hebrew Euphemisms and Idioms”, “The Poetics of Divine Wrath,” and more, Dr. McDowell and Dr. Towner cover more fascinating rewards of learning Greek and Hebrew. We hope you’ll find encouragement in The Rewards of Learning Greek & Hebrew by Catherine L. McDowell and Philip H. Towner! Throughout the book they cover 20 reasons why learning to wrestle with the biblical text in its original languages is more than worth your time and effort!