Who Created Christianity? is a collection of essays by top international Christian scholars who desire to reinforce the relationship that Paul had with Jesus and Christianity.

There is a general sense today among Christians in certain circles that Paul’s teachings to the early Christian church are thought to be "rogue," even clashing at times with Jesus’ words. Yet these essays set out to prove that the tradition that Paul passes on is one received from Jesus, not separate from it.

The essays in this volume come from a diverse and international group of scholars. They offer up-to-date studies of the teachings of Paul and how the specific teachings directly relate to the earlier teachings of Jesus. This volume explores with even greater focus than ever before the tradition from which Paul emerges and the specific teachings that are part of this tradition. This collection of essays proposes a complementary work to the work of David Wenham and his thesis that Paul was indeed not the founder of Christianity or the creator of Christian dogma; instead he was a faithful disciple and a conveyer of a prior Christian tradition.

1. Paul and Jesus: Issues of Continuity and Discontinuity in Their Discussion by Stanley E. Porter

2. How and Why Paul Invented "Christian Theology" by N. T. Wright

3. The Origins of Paul’s Gospel by Graham H. Twelftree

4. When Paul Met Jesus: How an Idea Continues to Be Lost in History Past and Present by Stanley E. Porter

5. Paul and the Jesus Tradition: An Old Question and Some New Answers by Rainer Riesner

6. Continuity and Development in the Ministries of Jesus and of Paul by Christoph W. Stenschke

7. Paul’s Significant Other in the "We-Passages" by Joan E. Taylor

8. Whose Gospel Is It Anyway? The Glory of Christ in the Prophetic Ministry of Paul according to His "My Gospel" and "Our Gospel" by Aaron W. White

10. The Parallels between 1 and 2 Thessalonians against the Background of Ancient Parallel Letters and Speeches by Armin D. Baum

11. Metanoia: Jesus, Paul, and the Transformation of the Believing Mind by Alister McGrath

12. You Would Not Believe If You Were Told: Eschatological Unbelief in Early Christian Apologetics by Peter Turnill

13. Paul on Food and Jesus on What Really Defiles: Is There a Connection? by Craig A. Evans

15. Women in the Pauline Epistles: Lessons from the Jesus Tradition by Erin Heim

16. Twelve Theses on Matthew and Paul: The Jewish Gospel and the Apostle to the Gentiles by Michael F. Bird

17. Paul and the Paternoster: Some Mainly Matthew Observations about a Pauline Prayer by Nathan Ridlehoover

18. The Rediscovery of David Wenham’s Rediscovery: Reflections on a Pre-Markan Eschatological Discourse Thirty-Six Years on by Craig Blomberg

19. Portraits of Jesus and Paul through the Lukan Lens by Steve Walton

20. "Every Sin That a Person Commits Is Outside the Body" (1 Corinthians 6:18b): Paul’s Likely Dependence on the Jesus Tradition by John Nolland

21. Jesus Is Lord: The Rhetorical Appropriation of the Teaching of Jesus in 1 Corinthians 5 by Peter Davids

22. The Temple and Anti-Temple at Colossae by Greg Beale

23. Filling up What Is Lacking in Christ’s Afflictions: Isaiah’s Servant and Servants in Second Temple Judaism and Colossians 1:24 by Holly Beers 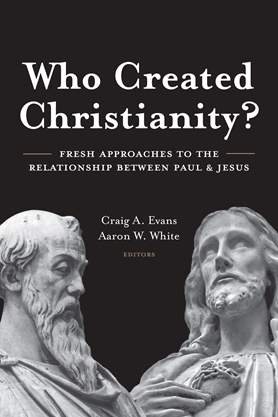