Then and Now Bible Map Pamphlet is a full-color booklet that includes 17 maps showing biblical cities and countries in black and modern-day map boundaries in red. These bright colorful Bible maps are affordable and have large print. They cover the major biblical areas: Canaan, Assyria, Babylon, Egypt, Paul's Journeys to Rome, and the land given to the 12 tribes of Israel. The Then & Now Bible Map Pamphlet is a fantastic Bible study tool. Rose Publishing is the #1 Christian publisher of Bible maps and atlases, occupying the majority of the slots in the Top 10 list of best-selling Bible Maps and Atlases.

The physical pamphlet version is 8 1/2 by 5 1/2 inches folded, which fits in most Bibles; it unfolds to 38 inches long. The e-book and/or digital versions can be scrolled or zoomed.

Then & Now Bible Maps will help you better understand the events and stories in the Bible by showing you where they occurred in comparison to modern day locations. Your Bible study becomes more meaningful when you learn the location of Old Testament Persia and see the places Paul's first missionary journey would take him if traveling the same route today. You will also better understand the biblical context of the places that are in the news every day, like Syria, Lebanon and Macedonia.

You will refer to the Then & Now Bible Maps pamphlet often to see:

You will find Then & Now Bible Maps is a very useful supplement as you learn more about the Scriptures. 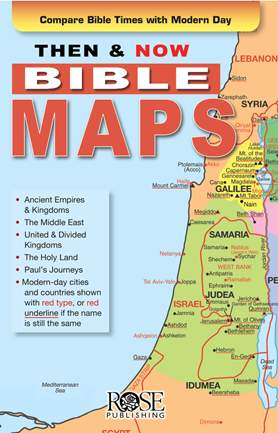