The Temple Pamphlet includes full-color pictures and diagrams of the First Temple (Solomon's Temple) and the Second Temple (New Testament Temple) in Jerusalem.

The Temple Pamphlet is an amazing full-color booklet with hundreds of facts about the Temple. In the First Temple picture, each of the furnishings are identified. In the Second Temple diagram, you can see King Herod's expansion of the New Testament Temple with the massive courts that were added before Jesus' birth. These were the courts where Jesus taught and prayed.

The Temple pamphlet has a detailed and colorful diagram of the Jewish Temple drawn to scale based on measurements from the Bible. Each of the Temple furnishings are explained in detail, as well as their functions, purposes, and the meanings they have for believers today. The Temple Pamphlet also has a question-and-answer section filled with fascinating facts about the biblical Temple.

The Temple Pamphlet tells the 1000-year history of the Temple in Jerusalem. An historical time line shows the years the Temples were built, destroyed, and rebuilt. The timeline covers:

The Temple is an excellent overview on "God's dwelling place on earth." 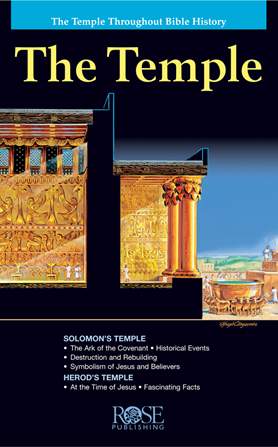