The Center for the Study of New Testament Manuscripts

New Testament Papyrus P47: A Transcription is a companion to the groundbreaking two-volume facsimile edition of P45, P46, and P47. These three partially preserved papyrus codices are among the oldest manuscripts of the biblical text. Dated from the third century, they contain passages from all four Gospels, the book of Acts, the Pauline epistles, the book of Hebrews, and the book of Revelation, making them some of the most significant witnesses to early Christian Scripture that exist today. They bear heavily on our current understanding of the origins of the biblical text.

The present volume is a companion to the two-volume facsimile edition of P45, P46, and P47 that is being simultaneously published by Hendrickson. This companion volume contains (1) a general essay that introduces all three papyri and that discusses the methodology The Center for the Study of New Testament Manuscripts used for digitizing and transcribing them, and (2) a meticulous and thoroughly vetted transcription of P47. Together with the accompanying facsimile edition, the present volume will give scholars and students of New Testament manuscripts an unparalleled encounter with these crucial witnesses to the Bible’s textual history.

• Includes an essay that introduces the three papyri and that discusses the methodology The Center for the Study of New Testament Manuscripts used for digitizing and transcribing them.

• Contains the most meticulous and vetted transcription of P47 ever published.

About the Center for the Study of New Testament Manuscripts 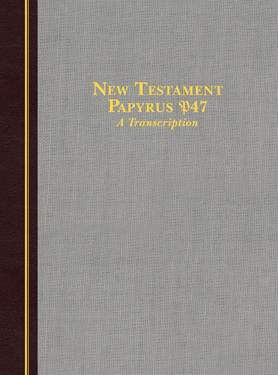