In a glance, Denominations Comparison Chart compares what each Christian church body believes about God, the Trinity, Jesus, the Scripture, and other spiritual issues. This easy-to-read pamphlet summarizes church history and beliefs of the different denominations on key topics. It includes a "Family Tree of Denominations" which shows the roots of today's denominations and when they organized. 12 panels, fits inside most Bibles, 8.5 x 5.5 inches, unfolds to 33 inches long

Each denomination believes in the deity of Christ and the importance of Scripture, so how are the groups different? The Denominations Comparison shows what denominations have in common as well as where they differ.

In addition to the side-side comparison of the 12 Christian denominations, the Denominations Comparison pamphlet contains a list of 42 "Helpful Words to Know" for studying denominational differences. This list defines words such as: Anabaptist, apocrypha, canon, Eucharist, incarnate, pope, predestination, and puritan.

He is the author of over 50 articles (e.g., in the Christian Research Journal, Moody Monthly, Pastoral Renewal, Mission Frontiers, and Journal of Evangelism and Missions) and 13 books pertaining to apologetics, religion, and biblical theology, including two winners of the Gold Medallion Award, An Unchanging Faith in a Changing World (1997) and Faith Has Its Reasons (2001; 2d ed., 2006).

Look Inside: Sample Pages of Denominations 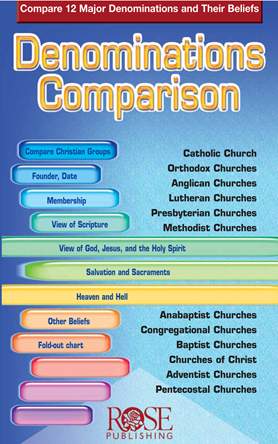