Creation Rediscovered, by Jeffery M. Leonard, guides readers through a contextual reading of the Bible’s creation stories. Over the last two centuries, few subjects have generated as much controversy for Christians as has creation. The whethers, whens, and hows of creation have often become a battlefield in which the pitched forces of competing sides—Darwinists and creationists, young-earthers and old, figurativists and literalists—have struggled for the upper hand. Like most battles, this fight has tended to inflict a fair amount of collateral damage along the way. This is especially true for those put in the terrible position of feeling they have had to choose between the Bible they have fallen in love with and the science they have studied.

In this book, Jeffery Leonard writes to fellow travelers in the faith who want to take the biblical text seriously, while at the same time appreciate science’s exploration of what we consider to be God’s creation. It is his contention that setting the Bible’s creation texts back within their ancient context allows us to do both of these things. Indeed, Leonard believes that when we reread what the Bible has to say about creation in its original setting, we find meaning in the text far more profound than what we have previously imagined.

• Written by a Bible scholar 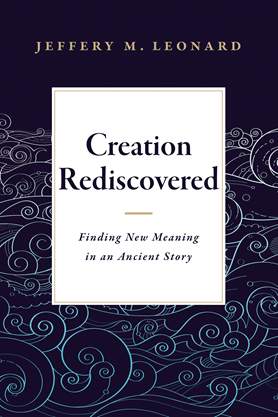