A compendium of approximately three hundred texts—in Greek, Hebrew, Aramaic, Latin, Ethiopic, Syriac, Coptic, and other languages—that are important for the study of Jewish messianism and early Christology.
In recent decades, the study of Jewish messianic ideas and how they influenced early Christology has become an incredibly active field within biblical studies. Numerous books and articles have engaged with the ancient sources to trace various themes, including “Messiah” language itself, exalted patriarchs, angel mediators, “wisdom” and “word,” eschatology, and much more. But anyone who attempts to study the Jewish roots of early Christianity faces a challenge: the primary sources are wide-ranging, involve ancient languages, and are often very difficult to track down. Books are littered with citations and a host of other sometimes obscure writings, and it can be difficult to sort them all out.

This book makes a much-needed contribution by bringing together the most important primary texts for the study of Jewish messianism and early Christology—nearly three hundred in total—and presenting the reader with essential information to study them: the critical text itself (with apparatus), a fresh translation, a current bibliography, and thematic tags that allow the reader to trace themes across the corpus. This volume aims to be the starting point for all future work on the primary sources that are relevant to messianology and Christology.

About the Author
Gregory R. Lanier (PhD, University of Cambridge) is Associate Professor of New Testament at Reformed Theological Seminary in Orlando, Florida. He has written extensively on early Christology and published Old Testament Conceptual Metaphors and the Christology of Luke’s Gospel (Bloomsbury, 2018); Septuaginta: A Reader’s Edition (Hendrickson, 2018); and Is Jesus Truly God? How the Bible Teaches the Divinity of Christ (Crossway, 2020). He also serves as associate pastor of River Oaks Church in Lake Mary, Florida. 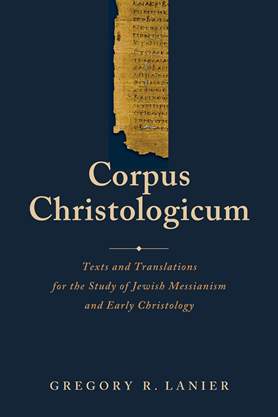