Originally published in 1728 at the beginning of the Enlightenment when rational criticism of religious belief was at its peak, William Law’s work succeeded in inspiring the most cynical men of the age with its arguments in favor of a spiritual life. Proclaiming that God does not merely forgive our disobedience, but directly calls us to obedience and to a life completely centered in him, Law declares, “If you will here stop and ask yourself why you are not as pious as the primitive Christians were, your own heart will tell you that it is neither through ignorance nor inability, but because you never thoroughly intended it.”

Law’s prose is packed with vivid imagery and illustrative anecdotes that both reveal what it means to lead a Christian life and unmask the perversion of Christian tenets by secular and spiritual establishments. This challenge of conventional piety and emphasis on Christian perfection directly influenced literary critic Samuel Johnson and historian Edward Gibbon, as well as Cardinal John Henry Newman. John Wesley called Law’s work one of three books that accounted for his first “explicit resolve to be all devoted to God.” Charles Wesley, George Whitefield, Henry Venn, William Wilberforce, and Thomas Scott each described reading the book as a major turning point in his life.

William Law (1686-1761) was educated at Cambridge, took a teaching position there, and was also ordained in the Church of England. He lost his access to university venues and the parish ministry when he was unable to swear allegiance to the Hanoverian dynasty that replaced the Stuarts as the rulers of Great Britain. Although forbidden the use of pulpit and lecture hall, he preached through his books, including Christian Perfection, The Grounds and Reasons of Christian Regeneration, Spirit of Prayer, and Spirit of Love. 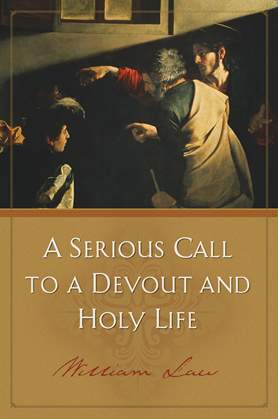